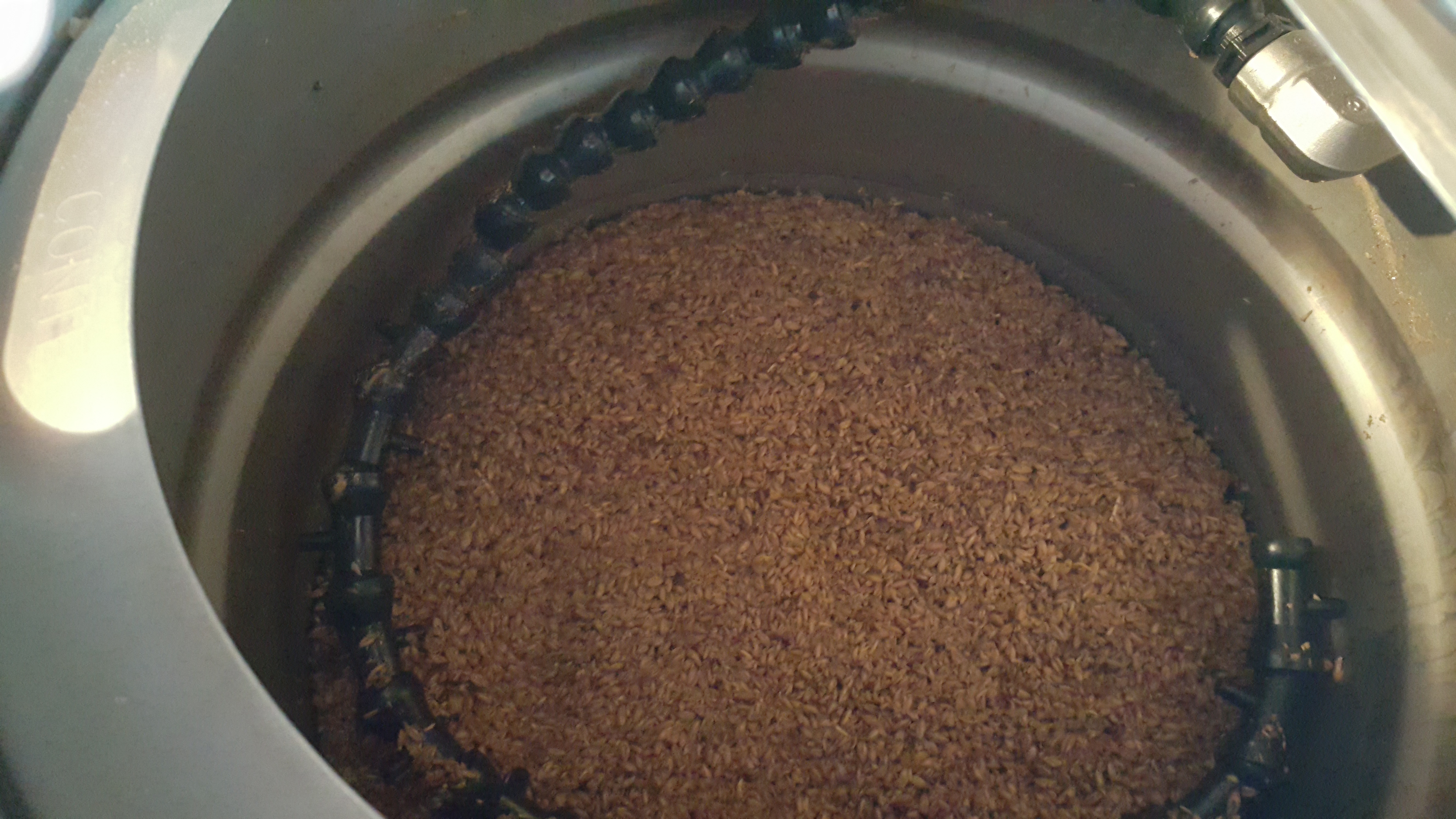 By this time, the hot liquor tank has been sitting over a burner all day, and is now in the 190 degree range.  Because I wasn’t paying attention, I went ahead and started to fly-sparge, only realizing once about 5 gallons is in the boil kettle that my sparge temp was too high.  I stopped the fly-sparge and drained the mash, deciding to batch sparge instead.  Once the 190 degree temp water that had made it into the mashtun was drained through the grain bed, I thought my best option was to add cold water to the liquor tank and allow the temp to settle prior to  running it through the grain.  While filling the tank with ground temp water from the hose, the boil kettle came to a boil, with about 5 gallons in it.  The boil kettle burner was on full blast, because I was expecting to fly sparge and fill the kettle with the sweet sweet nectar of the gods.  So, as I am over by the side of the house messing with the end of the garden hose, the kettle erupts and spews out boiling hot high gravity wort all over the place, instantly burning onto the outsides of the kettle, the burner, the stand and the ground.

A while later…  Got the sparge water cooled to 170, recirculated through the grain, the kettle filled and everything was ok now.  A short 90 minute boil with hops added per the schedule, a hop stand and 30 minutes with a way too small immersion chiller, I sent 10 gallons of wort into a fermenter where I had already send 3 lbs. of pineapple and 4 lbs. of mangoes into it after a short detour through a blender.  I has just bought a reflectometer and thought that I should give it a try…  So without any testing, calibration, or know how I plopped some wort on the end and jammed my eye into the spy hole…  My Beersmith estimate OG told me to expect to see 1.072, Heck – the pre-boil gravity was calculated at 1.062, the number I was seeing in this weird contraption showed 13.4% Brix.  Awesome!  I had no idea what that meant.  So I pulled out the old (rather new) hydrometer and re-measured utilizing something that made sense.  Post boil gravity read at a whopping  1.056!  Its ok, we can fix the efficiency with my next award winning beer.  While cleaning out the mashtun I was inspecting the grain and noticed that a lot of the grains were barely cracked, and the half a handful that I grabbed I was able to rub between my fingers and break apart.  Tasting the spent grain, it was still very sweet, and some were popping open in my mouth like little spouts of snot-grain gushers style.  I believe I can do better next time with the crush, as this was crushed very poorly.

I used a medical oxygen generator to aerate my wort through the rotating pickup tube, and I pitched two smack packs of Wyeast American Ale II.  Fermentation was a little slow moving, and after one week I took a sample for evaluation.  From my tasting notes, it was very sweet, and turbid, none of the yeast had started to settle out yet.  I could pick out the pineapple aroma and flavor, but the mango was hard to notice.  I also noticed a harsh bitterness that I attributed to the hops.  A gravity reading showed that it was still at 1.028 so I figured that the sweetness was coming from the crystal malt.

I let this one sit for some time (like months), additional tastings revealed a very harsh bitterness and aftertaste.  I no longer believed it to be hops as the flavor and aroma from the hops had long since died away.  There was sharp twang on my tongue and a very unpleasant aftertaste in the back of my throat.  I kept this beer around, and eventually kegged it (once I got kegs for Christmas) hoping that the aftertaste and sharp (not in a good way) flavor would calm down.  I never was able to drink more than a sip or two of this beer, and I eventually conceded – defeated and with a little bit of relief I dumped this beer.