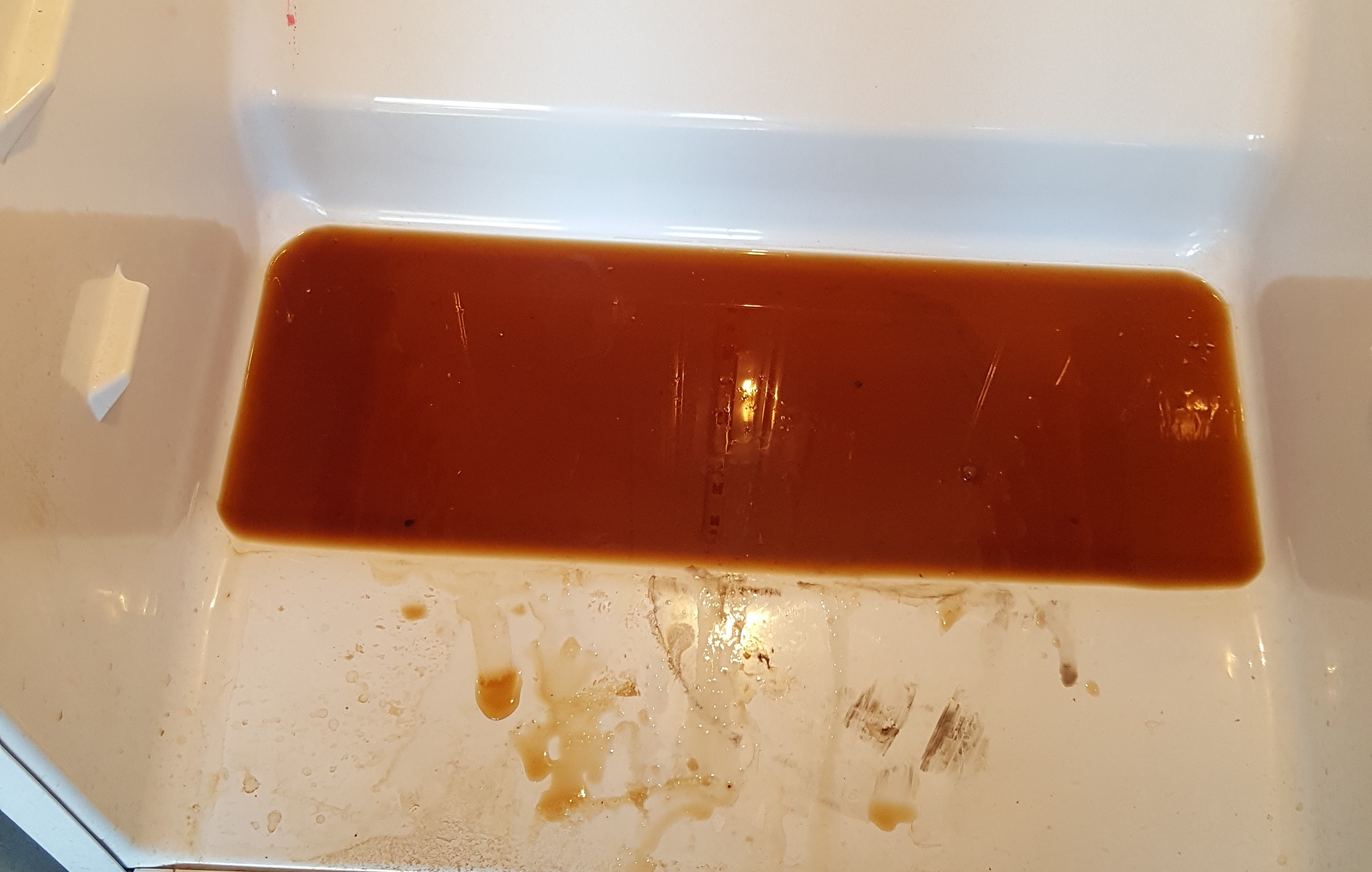 Mornings are great. This week was spring break, and my kids were out of school hanging out at home. I was playing with my daughters over breakfast and enjoying a cup of coffee. The recent snow was beginning to melt outside, and small birds were flying around the bird feeders outside looking for any morning treats. Skillet fried potatoes and over-easy eggs were coming off the stove in quick succession for the kids, myself, and my wife Amber. After this entertaining breakfast at the table, my family went off to pursue various tasks. Returning from the garage, my wife informed me of the garage smelling like beer, and that there was brown colored snow outside the roll-up garage door. She also notified me that there was some difficulty with the tap for the roasted brown ale in the refrigerator out in the garage the night before. In fact, the issue (as I soon discovered) allowed the beer to spray all over the inside of the refrigerator, leak out the bottom, and drain down the garage and out the front, right under the roll-up door. There was a ton of discolored snow, so much that it looked like an elk decided to relieve itself on our driveway next to the roll-up door…

Ok. Let’s take a step back and talk about problem solving, and in particular problem solving the keg issue. In my professional industry, there are formats for problem solving and understanding root cause. It makes no difference whether you are working with a group of quality control engineers, process development engineers, sustaining engineering, production control, operations, or management – the groups have to come together and agree to a format to solve problems. One particular format that is fitting for my home brewery keg dispense issue identified this morning is the 5 Why System. Developed out of the Toyota Production System in the 1950’s and is still a popular tool used for looking into a suddenly appearing or unexpected problem. One aspect of this system is that it does not place blame, but rather focuses on uncovering the root cause of an occurrence, allowing someone to only worry about issues when they happen, and then work towards ensuring they will not happen again. Seems pretty fitting as it’s just me in my home brewery, and I am naturally responsible for everything, and have not had time to complete a full PFMEA .

The technique is quite simple, and instead of focusing on losing all that tasty homebrew, or focusing on who did it, the system allows me to logically drill down to an actual issue or root cause. This root cause should point to a process that is not optimized, or perhaps has not been established yet. To add a little more structure here, a 5-M Ishikawa fishbone diagram could be used if there is more than 1 potential root cause. To start, a statement is formatted to define or outline the issue:

Problem Statement: The snow is stained and it looks like Elk Pee

Why? : There is beer coming from under the roll-up garage door (uh oh)

Why? : The Beer leaked out of the refrigerator

Why? : The Keg in the refrigerator was spraying beer because the tap came loose (I hope, YOU, the reader is laughing, because I am)

And, because asking why should not point to a person, but rather a root cause, the “tap came loose” isn’t a good enough answer.

Why? : The tap came loose and the poppet didn’t seal properly (not root cause, but getting there)

Why? : The keg did not get properly maintained, or was not tested properly after a rebuild (root cause)

Ok, so instead of blaming my wife, who is not at fault, I get to blame myself and the undocumented procedures for keg maintenance and qualification prior to filling. With the conclusion of the 5 why system, I now can formulate a plan to repair and correct, document and prevent. The kegs are pin lock, I decided to go that route after reading online that it was possible to get the quick disconnects for ball lock kegs switched. Pin lock kegs are only available as used, which makes the prices cheap, but additional parts should be kept on-hand for situations like this, where there is an identified failure. In the end, I discovered the little legs that connect to the spring for the poppet were not seated properly in the post it caused the body of the poppet to not re-seat properly after it was depressed. Since I have both Cornelius and Firestone kegs the poppets can easily get mixed up while disassembling and cleaning more than 1 keg at a time. As a preventative measure, I will be converting all poppets over to these universal poppets.

Actions Taken (To Do) and Documents to be created:

I will post each How to and update this post with links as they become available online.

One thought on “Beer, Brown Snow, Failed Kegs, and Root Cause”