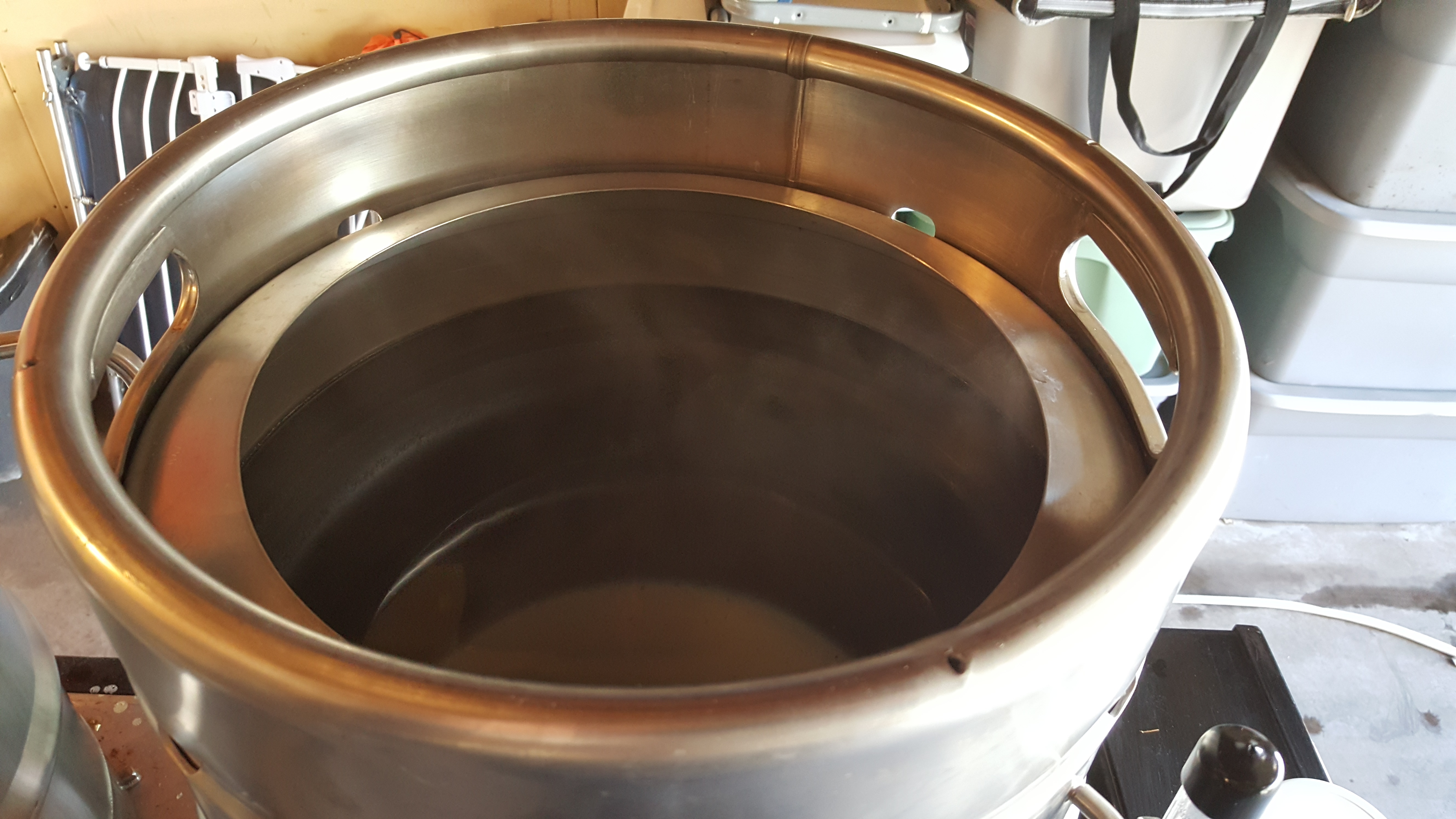 I am writing these old embarrassing stories first. It is odd, I guess that I feel it’s best to get this kind of stuff off my chest first. Nobody is perfect, and we all have made mistakes. I tend to remember these brewing days better, as the failures have helped to define why I do certain processes now. These stories certainly help to improve my writing, which probably needs some help, and no pictures this time, as I was not thinking of starting a blog yet…

This brewing day was quite unique. It’s been fairly cold in Colorado this winter, and while the snow generally melts right after a storm, this winter it layered on thick since October, and stayed cold for a long time. The snow never melted, and by the time January came around, the pile in the front yard was big enough to go sledding down (which my kids did on more than a few occasions). Due to this, I stayed holed up indoors, and have not been able to make any beer, and my brewing itch was screaming at me to get something done. At the end of January, there was a break in the weather, and the sun came out to bring the ambient temperature into the 60’s. I took this opportunity to break out my SABCO Brew-magic v350MS.

I modified the recipe from one I did for a family members wedding, a black rum oak aged oatmeal stout. Also, being a wedding beer, I wanted the ABV lower as non-craft beer drinkers were driving home afterwards. That particular beer was very good, but it was a little thin and didn’t have that creamy chewy mouthfeel I enjoy compared with commercial versions of oatmeal stout. When planning this brew, I decided to push the boundary of what I have done before, and pushed up the oatmeal to 4 lbs of flaked oats. The base malts consisted of Marris Otter and Vienna, while honey, crystal, chocolate, and roasted barley rounded out the specialty grains. The estimated original gravity (1.073) was out of style for this beer, but I figured that with the increased oatmeal, it would balance out the estimated 6.6 ABV.

This particular brew, I invited a friend from work and his family over. They are new in the country, and looking to get their kids immersed in the language and culture. My friend has never brewed beer but is extremely curious about the process. He also considers himself an avid fan of craft beer. We got started around 11am in the morning, and the moms in the group decided to take the kids to the park. Heating the water in the HLT to approximately 135 degrees F, the pipes opened to allow the hot water into the mash tun. This helps eliminate a couple of things. Pre-heating all the piping allows less temperature swings in the mash tun, and it also pushes all the air out of the piping. Once there is the enough water to cover the bottom filter screen, the water is shut off. I place a shallow layer of rice hulls over the screen to help with any large bits of malt being pulled into the dip tube.  29.5 lbs of various grains are gently poured  on top of the rice hulls from the plastic sacks they are store in. A 2nd layer of rice hulls was added on top of the grain. I didn’t purchase any flaked oatmeal, so earlier in the day I pulled down the pot for the turkey fryer brewery, and cooked 4 lbs of oats. I am guessing by eyeball the post cooked oatmeal consists of a volume over 5 gallons. The cooked oatmeal was added in steps during the mash in, and additional water filled the mash tun to very close to the top. Stirring the mash to break up the doughballs, and allowing the mash to settle and create a grain bed filter over the bottom screen. A few minutes of settling, and a few screen presses later, the RIMS pump started, and a new recipe created to record the brewing session.

This recipe follows a step mash starting at 133 degrees Fahrenheit for a protein rest due to all that oatmeal, then moves up to 145 for 60 minutes following with 158 for 60 minutes. Finally a mashout at 168 and a 90 minute boil. Problems from the moment I mashed in resulted in never achieving the desired temp rests, but it turns out ok. Starting the recirculation on the RIMS pump pulls the grain bed down tight. Stopping the pump, and re-stirring the mash had zero effect, so additional rice hulls were added. All the rice hulls. I had about a pound left and I added handfuls and stirred them in, each time turning on the pump slow to start the recirculation. Even with the pump barely flowing, the mash would get stuck. I added all the hulls I had. My friend, my son, and I all took turns stirring up the mash off the bottom screen then allowing everything to settle in hopes we could get a grain-bed setup. After a few hours, I gave up on the idea, and instead thought by doing a decoction, I could get the mash temp raised enough to convert the starches. I again pulled out my 2nd set of equipment, which was earlier utilized for cooking the oats. I put all the grain I could scoop into that pot and slowly started to raise the temperature. Once it boiled for about 15 minutes, the entire pot of grain was dumped back into the mash tun. This did raise the temperature into the mid 150’s but it didn’t hold the temperature for long, only a few minutes, as the tun is made of stainless, and there was a breeze blowing through the garage. A few more attempts to break up the compacted grain bed consisted of under-letting. Fresh sparge water is utilized to push the grain up away from the screen in the bottom of the mash tun, in a back flow type of situation. This did work, until the flow stopped and the grain-bed reset on top of the screen.

I gave up on freeing the mash, and began the process of lautering the cast-out into the boil kettle. Due to the grain bed issues, constant stirring of the mash was required to ensure that the wort drained from the malt and into the kettle. Sparging the mash followed the same stirring procedure, and after 90 or so minutes, enough liquid made it into the boil kettle to stop with the sparge. A lot of liquid remained in the mash tun, so I put a bucket under the drain valve and allowed the mash tun to drain through this valve. It was still slowly draining liquid when the boil was over 60 minutes later.

2 ounces of whole leaf magnum hops added directly to the boil kettle at the 60 minute mark in hopes it created a natural filter on the bottom of the kettle during pumping to a fermenter. Inspecting the kettle after boiling and draining all the wort to the fermenter, the hops did well in keeping the hot break out of the fermenter, but I have my doubts with how much it filtered. It looks like a lot of un-converted starch is sitting in the bottom of the kettle, almost like sand, and with the dip tube pulling directly from the bottom, I think a lot of that starch was sucked up into the dip tube and made its way into the fermenter. Measured OG @ 1.049 was very shy of the estimated OG of 1.073. This will be interesting…

2 smack packs of Wyeast British Ale Yeast were pitched a few hours later after the wort settled into place in the kitchen and hit with the medical O2 generator I keep in the house. Fermentation activity confirmed the next morning by observing the blow-off tube and blow-off water jug for bubbling activity. Fermentation activity slowly persisted for two weeks, when I decided I needed to keg it and force carbonate. I was lazy and didn’t bother measuring FG, but the brewing software shows the estimated FG to be around 1.023, which is a little high, and should provide a very thick texture. As I don’t have a chest freezer to store carbonated kegs yet, I pushed the pressure to 40 psi, and placed the kegs outside on the back porch overnight. The low ambient temperatures dropped the beer temp and allowed the CO2 to dissolve into the beer. Tapped it very quick after kegging, and it has a slight grain taste to the beer, but it’s not bad! Its tastes like a stout, but is brown in color and bright enough to see through the glass. I am going to call it a Roasted Oatmeal Brown. One keg had an issue with a poppet a few weeks later, and I have posted some thoughts on that here.

Lessons learned:
Its ok to be adventurous, but plan ahead for potential issues
Check the malt crush
Don’t brew an unproven recipe with guests
Keep with the plan even if the process went haywire – relax it probably will turn out fine
Always have more rice hulls than you think you need