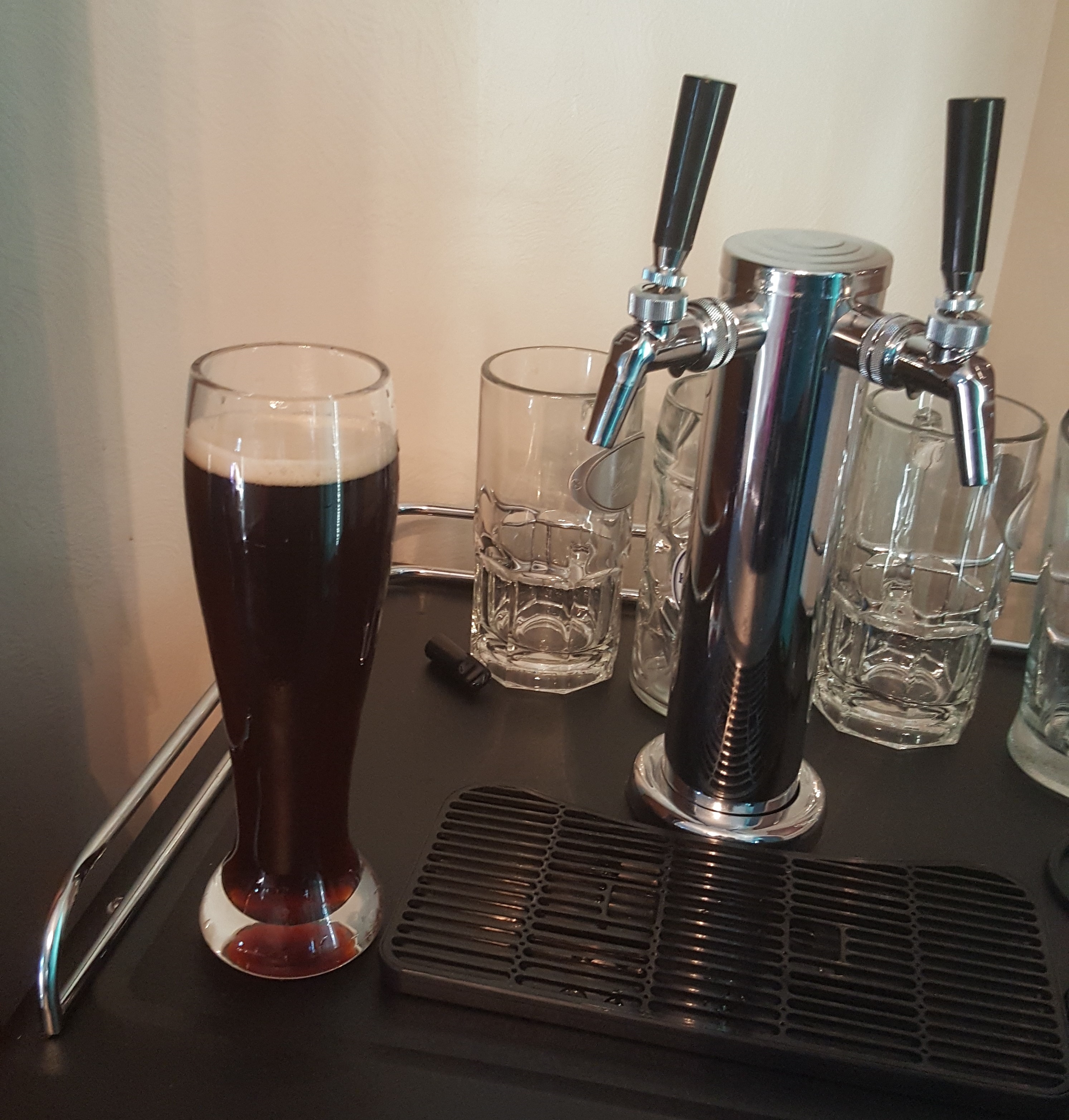 I purchased my first Kegerator!

I brooded over this for a long time. I felt stuck and unable to move forward. My lovely and very supportive wife organized a group family purchase last Christmas consisting of kegs and spare parts. I was and still am so exited to have received this awesome gift from her and my family. What I really had trouble with, and ultimately slowed down my brewing over the past year was the ability to drink the beer in those kegs. I have previously posted pictures of a few kegs in our garage refrigerator, but ultimately it was not ideal to keep them in there as it takes a large amount of refrigerator space to keep our family fed over the course of a week. Large bulk overflow items like eggs, milk, pickles, meat, cheese, fresh vegetables, kids drinks, cases of commercial beer, birthday cakes, and brewing supplies generally take up the space in the refrigerator. Due to placing my beer in these newly received kegs, and not having a place to keep the beer in them cold, my homebrew consumption dropped to nothing. I was not going to drink room temperature beer. My very supportive wife was ok with me taking over the refrigerator, but it was not working out for our family. So, I placed the shelves and drawers back into it and started to put together a list of parts needed to build an awesome kegerator.

Priorities are a funny thing. My first was to find a used chest freezer to convert, but due to a measurement error on my Sabco fermenters (totally my fault), I rejected 90% of the listings on Craigslist. This is because i did not have a clear vision of what I wanted. I kept going back and forth between a kegerator and a fermentation chamber, and ended up losing sight of my priority. Over time, as the frustration built, I ignored this priority and focused my efforts on my other geek hobbies. I wasted a good portion of the summer pursuing ethereum mining in my basement, rebuilding a couple of laptop computers, watching and dreaming of blue water sailing, and working on a rental property. As an outcome, this blog suffered with no updates, and I did no brewing or home-brew beer drinking. This also means I wasted a lot of opportunities to enter the beers I had into local competitions. The lack of focus began to eat at me as I continued to ignore the beer sitting in my fermenters into the fall months.

A week away to Germany for a business trip (during Oktoberfest) rekindled my interest in beer. I re-prioritized and decided to get a kegerator first, then a fermentation chamber second. Once again on Craigslist surfing the adds, only this time it was during our local hunting season – all the chest freezers were going for double or triple what I was seeing them for over the spring time.  Good things come to those who wait!

I found an ad online after Thanksgiving, and pulled the trigger.  It is a Beer Meister branded kegerator, and is able to fit 3 full-sized corny kegs.  Although it has only two taps, the stainless door, tower, and rails look extremely nice.  The stainless is very easy to maintain, and the previous owner just replaced the taps with new Perlick faucets.  The best advantage is that the system can and does dispense beer at 32 degrees.  Right at freezing.  This makes it perfect to carbonate over time at my desired carb level.  I do not “force and shake” as I find that the bubbles are too big, and the head disappears quickly.  I prefer to set the pressure between 12 and 16 psi and allow it to integrate over a 2 week period.  I have found the carbonation and head persist through the entire pint, and can avoid the carbonic acid bite that I detected by force carbonating through shaking.

The first beers put on tap was the rest of the roasted brown and cranberry cream ales that have sat around in the kegs for a while.  Fortunately, once the kegs kicked, there were 2 more beers ready to come out of the fermenters and into the newly emptied kegs.  These beers were the Simcoe Smash, and an Irish Red.